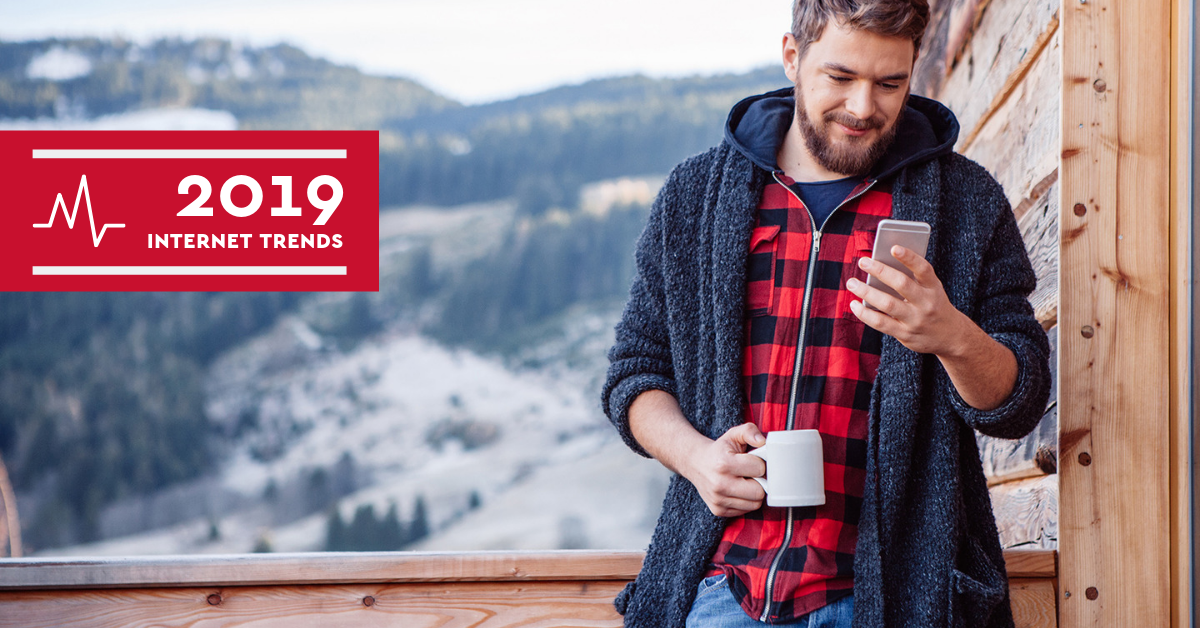 7 trends coming to Canada’s internet in 2019

What will the internet be like in 2019? Here are a few ideas.

The internet is changing so fast that it's hard to keep up. As we begin 2019, here are seven trends to watch for as Canada's internet continues to evolve.

It was once a given that the ability to connect and share with anyone, anywhere on the internet was a universally good thing. Now? Not so much. Whether we're talking about scandals like the Facebook-Cambridge Analytica mess or hacks that expose our personal information, many Canadians are re-thinking their privacy online. The strengthened Personal Information Protection and Electronic Documents Act (PIPEDA) will be in full force in 2019 and the topic of data privacy will continue to influence policymakers and politicians. Canadians are becoming increasingly skeptical of what social media companies and advertisers are doing with their personal information, and it's only a matter of time before initiatives like the #DeleteFacebook campaign start to gain momentum.

As awesome as the internet can be, it's undeniable that like all good things, you can have too much of it. Purposefully taking a break from the internet, or unplugging is something we all say we want to do but will this be the year Canadians start to do it? Canada's Internet Factbook 2018 found that one-quarter of Canadians unplug every day, and maybe we expect to see that to grow next year. The federal government has begun investigating the feasibility of a "right to unplug" law, similar to the one in France, that would allow workers to ignore work email and texts when off the clock. Whether you want to explore the great outdoors, read dead-tree books, or simply spend more time with family, unplugging regularly is a good choice for a New Year's resolution.

2015 was a simpler time. Donald Trump was still exclusively known as a reality TV star, Vine was still a thing, and it was still possible to believe most of what you read online (except for trying to self-diagnose on WebMD). 2015 was also the year of the last Canadian federal election when Justin Trudeau swept into power on the strength of a social media game that would impress a Kardashian. Nearly four years later, we are on the cusp of another federal election and everyone seems to think it will be nasty (more than normal I suppose). The rise of fake news, election interference by foreign nations (allegedly), and the wave of populism that has swept across the globe has everyone in Canada on guard for some shenanigans. No matter who you support politically, I think all Canadians would like to see Moose Jaw have more impact on the election than Moscow.

It has taken a little longer than most had hoped but the media landscape in Canada is undergoing some massive changes. As broadcast and cable TV continues to decline in popularity, Canadian media companies are finally starting to understand the value of digital services. Bell re-launched Crave TV as something that finally doesn't suck (finally Game of Thrones!!!), Netflix continues to dominate, and Canadians are embracing streaming music and video like never before. In 2019, there will be a lot of discussion on how the future of media, data, and broadcasting are going to unfold in Canada. A major review of the Copyright Act is due in 2019, as is a significant update of how Canada regulates its broadcast and telecom companies in the internet era. A lot could change. Canadians should also be on guard for Bell to take another swing at setting up a Canadian website blocking regime to guard against pirated content.

The promise of fast, ubiquitous mobile data has been as elusive as a Canadian Stanley Cup win but there's hope. 2019 should be the year that 5G mobile data networks begin rolling out in Canada. While they will be tested in large cities at first, 5G networks have the potential to completely transform mobile data with speeds and reliability that can enable all kinds of new services and potentially replace your home Wi-Fi network. 5G transmitters are capable of speeds up to 20 Gb/sec, which is up to 20 times faster than LTE. Of course, there are drawbacks. 5G transmitters are fast and reliable but also only communicate over relatively short distances. This means rather than a few large transmitters, 5G networks will require a lot of smaller transmitters to cover the same area. However, that will also help improve latency (the length of time it takes to get a response back from the transmitter) which will be a boon to technologies like autonomous vehicles.

Radio killed the video star. Don't call it a comeback, but right as the video bubble is ending, audio is having a moment. Questions have been raised about whether not people actually prefer to watch a two-minute video rather than read two sentences of text (spoiler alert: they don't), companies like Facebook have been accused of padding their video stats, and entire media companies who pivoted to video are going under. Coincidentally, podcasting and music streaming are both booming. Audio is experiencing a renaissance as we now do basic web searches with our voice (Hey Siri) and listen to hours of audiobooks as we commute to work. Audio is unique in that it can be consumed while doing something else. Multitasking with video, or even text, is not nearly as simple as anyone who has ever run into a mailbox while texting can attest to (I still have a bruise on my shin). Audio allows us to stay in the moment and be aware of our surroundings more than any other formal, which might go hand in hand with the unplugging trend.

While large corporations have largely been in on this trend for a while (some better than others), cybersecurity is now a mainstream problem. The rate of hacks is increasing and the tools and techniques that are needed to become a cyber-criminal are now cheap and easy to acquire. Cybercrime is becoming petty crime. This means that it is now cost-effective to hack even the smallest businesses, charities and even individuals. Hackers demand payment in untraceable Bitcoin or simply sell personal information on the farm web in bulk for pennies. As this trend escalates, Canadians need to be more aware than ever of the tools they can use to protect themselves. For most Canadians, basic cybersecurity protection is probably enough to keep most hackers from bothering. Many consumer-friendly products are now hitting the market (CIRA might even have something on this soon…) and the mandate of home IT managers has now gotten a lot more complex.

What trends do you see coming to Canada's internet in 2019? How will you use the internet and connected devices differently? By this time next year, we'll know.