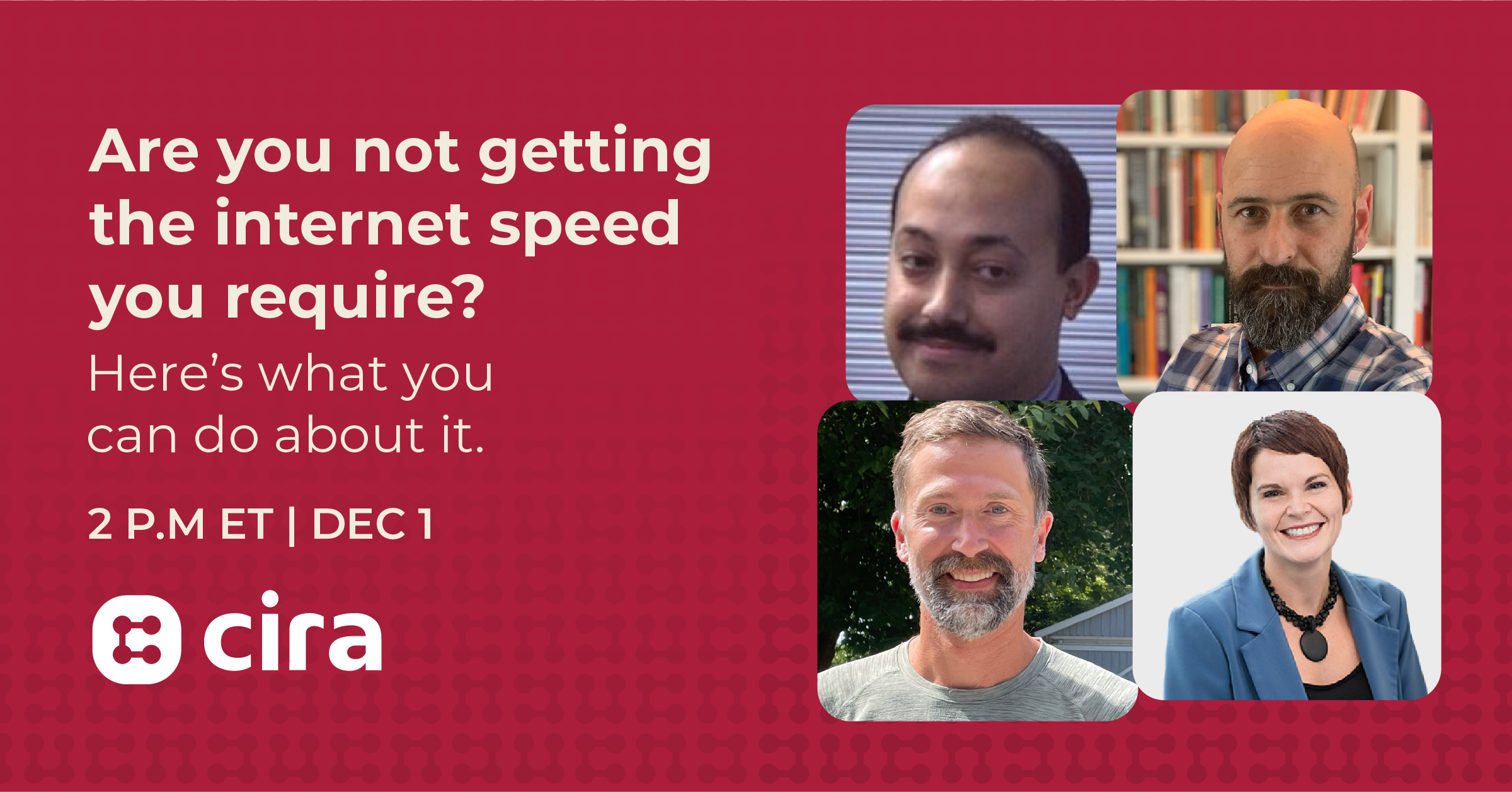 Are you not getting the internet speeds you require? Here’s what you can do about it: recap and Q&A

Earlier this month, CIRA hosted its last virtual meetup of 2022, titled Are you not getting the internet speeds you require? Here’s what you can do about it.

We assembled an expert panel including Andy Kaplan-Myrth, VP, Regulatory and Carrier Affairs from Teksavvy and Dr. Hosein Badran, Senior Director of Internet Growth and Trust at the Internet Society.  I also had the pleasure of participating on the panel while trying to keep up with my esteemed colleagues. I drew from my experience working in the rural broadband development field—particularly in how data can be used to effectively identify and map internet service gaps as well as how individuals can use this data to advocate for better service themselves.

CIRA’s Internet Performance Test (IPT) was a hot topic in our discussions, in both the questions we got from members, and in the answers given by the panelists. There was a wealth of examples on how CIRA’s IPT data has supported internet improvements in communities across Canada, as well as how it can play a role in improving individuals’ access to better internet services.

The live event drew an engaged audience with viewers submitting many thought-provoking questions. So many in fact, that we couldn’t get through the list! From the pool of over 60 questions we didn’t get to answer, here are the top ten questions that capture the most pressing issues for our viewers. These questions fall under three main categories: rural connectivity challenges, the CIRA IPT itself and advice for improving internet connectivity.

**Note that the questions were edited for clarity and length.

This is a common situation described by many in rural areas or areas with lower population density. New entrants are reluctant to invest capital dollars in the infrastructure with an unknown return on investment. My advice is to let all providers know there is interest. What will motivate them most is to know that there is interest from many potential customers. Some effective strategies can include involving councils to champion the cause. Community development/economic development groups can also be great allies to bring concerns to providers. Municipalities, First Nations or economic development groups may know of funding opportunities to assist as well. You can also try petitioning the neighbourhood on your own! A conversation with said provider may even result in learning their “magic number” of new customers needed to build out new infrastructure. Whatever the approach, CIRA’s Internet Performance Test is a good tool to employ for a neighbourhood or community to benchmark the current status of service in the area.

There has been over $8B in investments and commitments from the federal and provincial governments made over the past 10 years for initiatives to improve Canada’s internet. While that sounds like a large sum (and it is!), we know considerably more is needed. There is no “authoritative” answer to exactly how much more, however. What we do know, is that there is a need for a variety of approaches, plus some outside the box thinking, like utility-based models.

The concept of community-based networks and private/public partnerships is not necessarily new in Canada. The models vary widely, but the key concept here is that there is one “champion” organization that is involved that is attempting to balance the need of the private sector to generate revenue to keep the network running, and the objective of getting nearly everyone in the community more equivalent and better broadband access. I see those models as having played a big role in the past and continuing to do so in the future.

We know COVID has really cemented the need for reliable broadband. I think it also accelerated private equity, federal, provincial and municipal investment more than ever before in broadband and adopting different financial models to do so.

Both rural and urban Canadians pay municipal, provincial and federal taxes that support universal healthcare, education and infrastructure like roads, bridges and highways. The federal government (and many provinces) offer funding programs to offset the capital cost of network infrastructure which provide broadband services to low-density areas that do not have the same potential return on investment. Otherwise, these regions would likely not have access to these services if they were delivered entirely by the private sector, at their cost.

The Government of Canada, as well as many provinces and jurisdictions view access to affordable broadband, despite where one lives, as a mutual benefit to the economy as well as individual quality of life.

Stationary or Geosynchronous Satellite based broadband technology has been a service option for a long time. Recently we have heard a great deal about Low Earth Orbit (LEO) satellite services as a “new” option for underserved areas. Technically speaking, both technologies are capable of serving both rural and urban areas. However, satellite-based services are predominantly seen in rural areas for several reasons: 1) it is the only option available in some rural and remote areas. 2) Satellite services are typically more expensive (and usually less reliable) than wire-line services, which are most often available in urban centres and 3) As a way to mitigate bandwidth oversubscription, which causes progressive service deterioration to subscribers, some satellite service providers “black out” subscription to some geographic areas.

In broadband development, many service providers look for “anchor tenants,” which are business or commercial users that the provider can depend on for long term and high revenue services. Service providers are motivated to build new services to areas by the presence of these anchor tenants mixed with the potential for new business and residential subscribers.

Before running a test, individuals are asked to identify exactly where they are taking the test from by first inputting their postal code, and next placing their location on a map. Because tests are geolocated in this way, they can be compared to existing geographic boundaries. One of the great things about the IPT is we can use different boundaries to get different views and analyses as tests are aggregated together within boundaries like neighborhoods, communities, counties and provinces.

We are investigating ways to make the test more accessible including updating the IPT’s user interface and making it more mobile friendly. A mobile app is also a possibility too. We’re exploring options of how best to create an embeddable version of the Internet Performance Test as well as a browser extension, which will increase its availability and exposure of the test to more Canadians.

It can have a big impact! Devices with out-of-date software may be significantly slower. Devices with newer and faster processers will be faster. Be sure to minimize background applications that may be using data while online too.

Also, network equipment in a home, like routers, make a difference. Plugging a device directly to a router or modem with an ethernet cable will ensure faster speed and performance. If using a WiFi router ensure it is up to date with the latest protocols.

To some degree, how much speed is enough ultimately depends on the user; how much they are online, what applications they most frequently use, etc.

10 Mbps upload may be too slow for some individuals and families today, especially those who use videoconferencing software, game online and upload or transmit a lot of data via email or cloud storage. In the not-so-distant future, 10Mbps uploads will almost certainly be too slow for all Canadian internet users.

On the panel, the concept of future-proofing networks was briefly touched on by Dr. Badran, where he mentioned phasing in network capacity targets should be considered rather than establishing a simple universal minimum.

1. Run several Internet Performance Tests at different times of the day over the course of several days to see if there are daily patterns or patterns over a longer period of time. This can help you narrow down when you might experience issues, and help you pinpoint what they might be.

2. Review your service contract to see what you are supposed to be receiving. If your test results fall well below what you should be receiving, it’s time to talk to your ISP. If they are more or less in line with your contracted speed, consider upgrading if that’s an option.

3. Have a conversation with your current provider. Many people are pleasantly surprised that service providers can sometimes “boost” a customer’s profile which improves performance. If you have experienced lower speeds than committed, and there is nothing that can be done to improve it, ISPs may be willing to negotiate a better price.

4. Consider upgrading your home network equipment. Old wireless routers may be the bottleneck. There are also routers with special software that can help prioritize traffic on home networks to certain devices over others. Also, you may want to consider plugging directly into the router with an ethernet cable if at all possible.

5. Schedule device time with your family. This is a decidedly low-tech solution but simply making a chart that identifies individual’s “online-time” can help manage bandwidth (and minimize disagreements).

The volume of questions asked during our virtual meetup speaks to the ongoing need for improvements to Canada’s internet infrastructure. We hope that these questions and answers have provided you with some helpful tips on what you can do to help your current connectivity. We also received several questions around the subject of network resiliency, a topic on many people’s mind after Hurricane Fiona triggered a major telecommunication impact across Canada’s east coast. Additionally, network resilience, or the apparent lack thereof played a large part in the discourse of the large-scale network outage on July8th, 2022. The topic is so current and relevant it will be covered in a blog post all its own, so stay tuned in 2023.