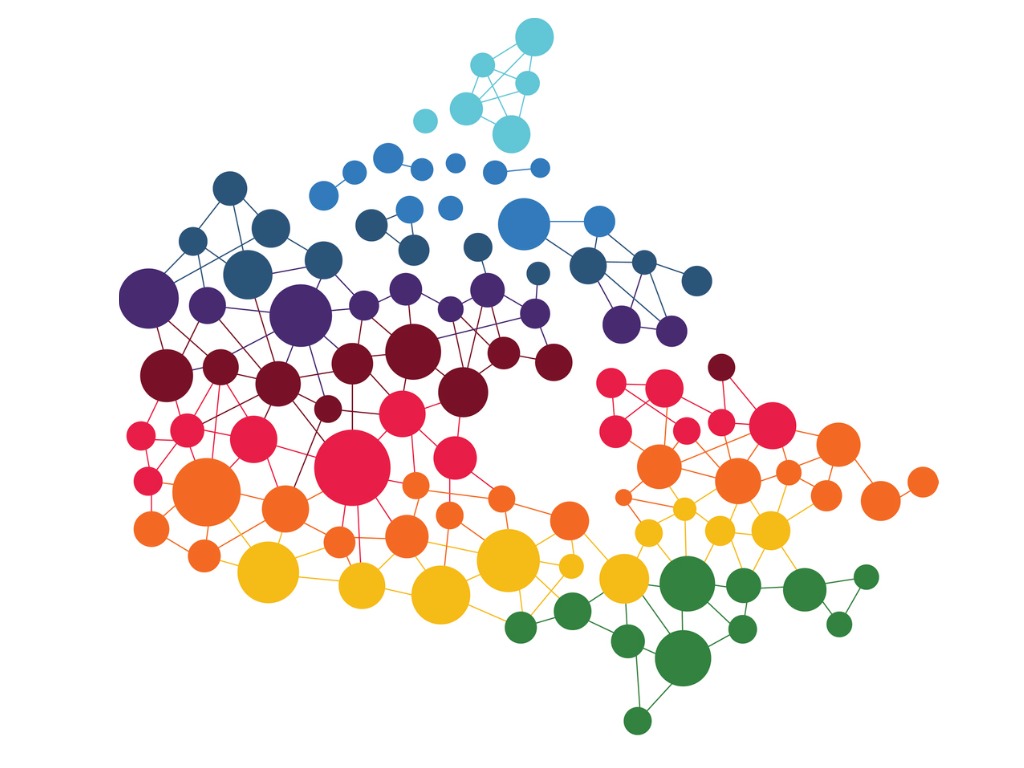 We reached out to experts from four of Canada’s leading IXPs to get their insights into how COVID-19 has affected internet traffic.

As the number of COVID-19 cases in Canada continues to rise, Canadians from coast to coast are confining themselves to their homes to slow the rate of infection and prevent our health care system from being overwhelmed. Despite these efforts to “flatten the curve,” life must go on. And that means Canadians must rely on their internet connections more than ever before to do their jobs, complete their school work, and interact with their families and friends online in a meaningful way.

We reached out to experts from four of Canada’s leading Internet Exchange Points (IXPs) to get their insights into the impact that the pandemic has had so far on internet usage in Canada and what needs to be done to ensure Canada’s internet remains strong and resilient through this crisis and beyond.

Q1. What change in traffic patterns has your IXP seen since the COVID-19 pandemic began?

Theodore (MBIX): Our traffic has increased in the evenings. Prior to this our traffic was heaviest during the business day.

Kevin (TORIX): We saw a 20 to 25 percent boost in traffic initially, which is closer to peak levels. Over the past week this has stabilized, as content providers have begun adjusting stream quality based on demand. As well, traffic patterns during the day have increased and usage between 10 am and 11 pm is now much closer together. Historically, daytime usage has been lower than it is now.

Theo (YYCIX): Educational traffic has dropped, but then with students and workers at home the traffic on YYCIX grew about 25 percent overall.

Q2. Are there any organizations you wish were peering at your IXP right now that aren't?

Chris (VANIX): Content delivery networks (CDN), provided they are willing to abide by the same conditions as other participants, in particular paying port fees.

Theodore (MBIX): The City of Winnipeg started running its own Border Gateway Protocol (BGP) this past year. I think they would be an ideal candidate to peer, especially with potentially thousands of people working from home right now. The City of Winnipeg is an enterprise network, a type of network that is underrepresented at MBIX right now and one that would benefit from connecting to a local IXP.

Kevin (TORIX): The TorIX peering fabric has an extremely healthy mix of organizations. Any organizations, including internet service providers, that have a diverse network in Canada can benefit and we welcome and encourage them to peer.

Theo (YYCIX): During the flood in 2013, Calgary’s last major disaster, we hoped that the web resources of the Alberta government and City of Calgary would become directly reachable, but this hasn’t happened yet. But we are happy that Alberta Health's web resources are reachable via a partner on YYCIX.

Q3: What can the government, ISPs, content providers, and other network operators do to keep Canada's networks strong and resilient?

Chris (VANIX): They can all support IXPs by peering. They can also support them with financial contributions or volunteering, or even by becoming members and contributing to good governance.

Theodore (MBIX): Peering locally as much as possible increases the resilience of the network by providing local paths to local networks. While we’ve seen Netflix and YouTube reduce bandwidth already, keeping local-to-local traffic off the backhaul links between cities would help as well. For instance, when the majority of Manitobans visit the province’s COVID-19 information website, the request leaves the city and comes back, and for many others it leaves the country and comes back.

Kevin (TORIX): The multi-stakeholder groups have been working together to identify patterns of use and areas that can be addressed. At the moment, our focus is on keeping our environment healthy.

Theo (YYCIX): Networks should build sufficient redundancy and capacity. They should ensure long-haul links are on diverse physical paths and should also consider peering at internet exchanges to improve capacity and establish local paths which are less vulnerable to catastrophic events.

Q4: How can IXPs help companies, organizations, or users who have started working from home?

Chris (VANIX): IXPs can play a key role in keeping local traffic local and avoiding longer paths that could become congested during peak periods. These longer routes are also more expensive and take longer to increase capacity. Peering at an IXP also reduces latency, contributing to a better overall user experience. VANIX has lowered its port fees in the last year, which can help alleviate the cost of increasing capacity at the IX.

Theodore (MBIX): This is a difficult question to answer, because each IXP is so different from the next. One thing that many of us have done is to automate the most time-consuming aspects of running an IXP—updating prefix lists.

Kevin (TORIX): Maintain a vibrant exchange, keep peers updated on emerging patterns and notify them of potential congestion on their own ports. The IXP needs to stay focused on its primary goal and provide a platform for our peers to provide the help and support end customers need.

Theo (YYCIX): The use of latency-sensitive services such as VPNs and conferencing has spiked.  If a person at home is on one provider but the service end-point is on a different provider—and those providers don't work together to keep traffic in Alberta—then latency is badly degraded by routing traffic via the opposite end of Canada or via points in the USA. The primary purpose of Canadian IXPs is to keep traffic local and reduce latency. Everyone on that list should encourage their providers to participate at local exchanges to improve latency.

Q5: Do you have any concerns about the ability of Canada’s networks to handle the increase in traffic over the next few weeks?

Christ (VANIX): It’s become apparent that internet connectivity is no longer a luxury, and should be treated as an essential service. I have concerns about what would happen if an ISP were unable to continue due to the financial strain posed by COVID-19. IXPs can help offset increased costs due to rising bandwidth demand (fixed yearly cost vs. usage based billing of transit). Government has a role to play here in helping ISPs—particularly the smaller ones—remain viable through these difficult times.

Theodore (MBIX): Generally no, I don't have any concerns about the ability of Canada's networks to handle the increase in traffic over the next few weeks. Each network is different of course. Some will have contention on transit ports, while others will have contention on peering and IXP ports. Some may be limited by internal backhaul capacity, while others may be limited in the last mile. The phone networks, on the other hand, are a different story. Due to the physical nature of the phone networks, we've seen a lot more capacity issues there than on the internet. Personally, I’ve had many issues connecting to conference calls that start at the top of the hour.

Kevin (TORIX): The Toronto Internet Exchange took significant measures in March to increase backbone capacity and provide free capacity for our peers. We currently don’t foresee any significant congestion points on our systems.

Theo (YYCIX): In early February a rockslide in BC cut the most critical cross-Canada fiber path for almost two weeks. YYCIX saw impact reports from many network providers, who scrambled to establish workarounds because they had built insufficient fiber path redundancy and capacity between Calgary/Edmonton and Vancouver/Seattle (mostly for economic reasons). Most traffic was re-steered through Toronto and Chicago before heading to west-coast service endpoints, thereby increasing network latencies four-fold or more. Other traffic continued on undamaged but overwhelmed paths; the congestion caused other problems.  The majority of BC landline phones were inoperative for the first weekend, and many Canadian businesses endured a variety of impacts for the duration of the cut.  With the current work-from-home situation, a similar failure could be more catastrophic­—VPN and conferencing services crucial for business continuity would likely crumble.

We hope you enjoyed this discussion with some of Canada’s leading IXP managers and have gained some valuable insights into the ongoing impact of the COVID-19 crisis on the internet in Canada.

The discussion highlights how important interconnection is to Canada’s internet and the critical role IXPs play in ensuring its performance and resilience. Most importantly, it underscores the urgency of increasing the number of networks of all varieties that are peering in Canada, including incumbent ISPs, all levels of government, large employers and content providers. As more and more of these networks begin peering with IXPs, performance will improve and congestion on cross-country transit routes will be reduced.

Canadians trying to make the best of their time in social isolation will be the primary beneficiaries of increased peering among Canada’s networks. When more ISPs and content providers peer, Canadians will enjoy high-speed access to the content they need to stay productive and entertained during the crisis. When government networks peer, their employees will have fast, stable connectivity to ensure they can do their jobs remotely, and Canadians will have reliable access to critical public health updates. For large enterprise network operators, peering gives their employees more reliable VPN access and better performance when using bandwidth-intensive applications like videoconferencing.

If you have any questions about how your network can begin peering, be sure to consult CIRA’s directory of Canadian IXPs.