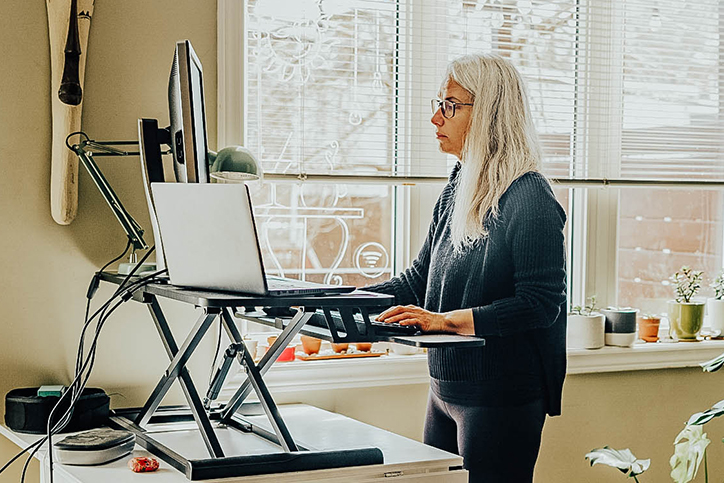 Offices across Canada are opening back up and inviting their employees to return as pandemic restrictions lift country-wide. But after two years of internet-powered remote work, many may be wondering what employees actually want as we ease out of the pandemic.

There are a lot of benefits to working in a physical office space. Having people together in person is great for collaboration, and employees can be immersed in the corporate culture and freed from the distractions of dirty laundry or a comfortable couch. For workers, some are weighing the comforts and convenience of working from home, while others may welcome clearer division between work and their home life.

One of the main reasons that working from home is more comfortable is the flexible dress code. Canadians have been trading their blazers and slacks for hoodies and track pants during remote work. Six in 10 Canadians say they wear active or athletic clothing on most days when working remotely. Only 17 per cent say they hardly ever or never wear it (which may leave you wondering: what exactly are they wearing?).

Another big plus is more time with your furry companions. You may not miss your colleagues as much if you have a cat or dog to keep you company, and 41 per cent of remote workers report having a pet at home. But after a couple of years of remote work, having Mittens walk in front of the camera during a work meeting could be getting old. One third of pet owners say their critter appears on camera at least some days of the week.

Four in 10 Canadians also say they are working more hours per week since they started working remotely. For another 43 per cent, their hours have stayed the same, and only 11 per cent say their hours have decreased. The lack of division between the office and the home is proving difficult to manage for some workers.

Flexibility can also come in the form of multi-tasking during meetings. Canadians are finding that certain meetings can be monitored while they perform a range of activities, including direct messaging colleagues (47 per cent), using the washroom (42 per cent), working on other projects or tasks (39 per cent), or simply pacing around the house (35 per cent). So you can understand why 39 per cent of workers say “it depends” when asked whether the norm is camera on or camera off during their organization’s video conference meetings. Another 36 per cent say cameras are typically on during video meetings, and 19 per cent say they are typically off.

Remote work clearly has its ups and downs. But for many that were at first forced to work from home, doing so is now a strong preference. It’s important enough that 39 per cent say they would be unwilling to work for an organization that does not allow employees to work remotely at least some of the time, while only 23 per cent are willing to do so.

While the vast majority of Canadians are looking forward to getting back to “normal” after two years of pandemic disruption, remote and hybrid work look like they’ll be part of the new routine that many want to keep. Business leaders will need to consider this desire as they design the future of work within their organizations.